A Fraternal Law of Natural Selection 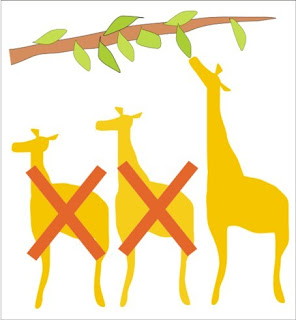 Over the last two years, I have talked with fraternity and sorority members from all over the country about brotherhood and sisterhood. These conversations often take on a familiar tone, as most chapters struggle with the same issues – fraternities struggle with accountability, and sororities struggle with cutting through the superficiality and making members feel valued, connected and appreciated.

Inevitably, these conversations often turn to a long discussion about recruitment – who are we recruiting, and how are we recruiting them? How are we “selling” brotherhood and sisterhood to prospective members? I have written previously of this concept and its importance in advancing the cause of fraternity.

I was recently facilitating the Wooden Institute for Beta Theta Pi, and a conversation among some of the facilitators came up about negative campus cultures and the pressure that many “good” chapters feel to conform to the norms around them. I’ve written about that regression to the mean before, which you can read here. Simply, it is hard for “good” groups to stay good for long, because eventually they conform to the pressure of being more like the groups around them. This is true with the campus social culture, and it is true with new member education and hazing. The conversation that night got me thinking that it is also true with recruitment. Chapters who want to recruit “the right way” soon feel the pressure to recruit “the wrong way,” particularly if they feel that other chapters are gaining a competitive advantage with the “always joiners” by showing them a good time and feeding them lots of alcohol during the recruitment process.

During this conversation, one of the Beta staffers said “I wish our chapters could recruit every year the way we recruit for our expansions.” In other words, what would it look like if chapters did expansion every year instead of participating in a campus formal recruitment process? Instead of sorting through the always joiners, recruitment could consist of chapters going out and setting up shop in the student union, getting referrals from faculty and administrators, meeting a lot of maybe or never joiners, having conversations with them, and getting the right guys to join for the right reasons.

This conversation led me to a fun thought experiment – what would it look like if we just got rid of formal recruitment and let each fraternity do recruitment in the manner they saw best?

I have a theory as to what would happen if we got rid of formal recruitment – McCreary’s Theory of Natural Selection. For the sake of this post, I’m only going to speculate on what would happen with IFC fraternities – I doubt the NPC has any plans to scrap the formal recruitment process any time soon, and certainly the membership intake process deserves a blog post of its own, so we’ll just talk about IFC fraternities for the remainder of this post.

Here are the three main postulates of McCreary’s Theory of Natural Selection:

Postulate #1 - Time and Pressure Are Inversely Correlated. The less time you give fraternities to make decisions about new members, the more pressure they will be under to conform and “recruit like the other groups.” When given only a few weeks at the beginning of a Fall semester, there is a mad dash among fraternities to go out and woo the “always joiners” who sign up for fraternity recruitment. Knowing that, often, these students are seeking to join for social reasons, recruitment quickly devolves into a race to see which fraternity can show prospective members the best time, showcasing only the social elements of brotherhood, with the result being the wrong people joining for the wrong reasons. However, if fraternities are not working under such a tight time frame, they will be under less pressure to conform, more comfortable doing recruitment in the manner that is more natural and comfortable for them. This recruitment may take on a social flare, with some chapters choosing to continue using alcohol to recruit, but fraternities looking for other ways to recruit won’t feel as much pressure to conform and can take their time in finding the right members.

Postulate # 2 - Pressure and Variance Are Inversely Correlated. As far as I can tell, the formal recruitment process is primarily designed to eliminate as much variance as possible within a given fraternal community. This works exceptionally well with sororities – our research on brotherhood and sisterhood is a perfect demonstration of this. The sisterhood profiles of the sororities on a given campus all look fairly similar – there are only small differences between the various sororities in a given campus community. The entire statistical model behind sorority recruitment is designed with this end in mind – no sorority can get that much bigger than the rest. Everyone gets basically the same experience in every house, and the sorting of women into the various houses relies more on math than it does on culture or fit. The result is a fairly uniform experience with only minor differences between chapters. Ask a sorority member on your campus and she’ll tell you (if she has any objectivity at all) that she could see herself being happy in most of the sororities on campus.

In the last 30 years, with the onset of the campus-based fraternity/sorority advisor, many campuses have imposed a sorority-esque style of recruitment on the IFC fraternities, and my guess is that the long-term results of this have been disastrous (on another day we can discuss whether the fact that 65 percent of entry-level fraternity/sorority advisors are female and are merely replicating what they know has anything to do with this shift). We have slowly diminished the variance in our fraternity communities, and not in a good way. The “always joiners” who buy the stereotype are presented with no (or very few) alternatives to the stereotype during a very brief and contrived recruitment process, and the result has been entire fraternity communities that exist for no other reason than to provide a social experience for members. The variance has been eliminated, which means that the “best” fraternity on campus is often indistinguishable, or barely distinguishable, from the worst.

I theorize that if the pressure to recruit as many members as possible as quickly as possible were eliminated, then we would begin to see more variance within fraternal communities. Chapters who wanted to recruit the right people the right way would have more time and opportunity to do so, and the chapters who wanted to recruit with alcohol could do so and face the inevitable consequences of that decision. Fraternities could take their time, really getting to know potential members and the reasons they seek membership. Similarly, recruits would be under less pressure – they would have more time to evaluate their options and choose the group that best resonated with the experience they were seeking. The resulting fraternity community would be multi-tiered, with roughly equal portions of “good” chapters providing a values-based experience, “mediocre” chapters providing a hybrid values/social experience, and “bad” chapters providing only a social experience.

Once this sorting takes place (which will take several years), campus communities can then do a better job of recognizing and rewarding the “good” chapters, improving and assisting the “mediocre” chapters, and closing, reorganizing and fixing the “bad” chapters. In today’s climate, this formula is fairly difficult to follow, either because the differences between good and bad are often small, and/or there is a disproportionate number of bad chapters, and/or fraternity communities have become so stagnant and under-performing that our idea of what a “good” chapter is even supposed to look like has become terribly skewed.

Simply, we need to interject more variance into our fraternity communities, and getting rid of formal recruitment is the best way I know to do it.

Postulate #3 - Left To Its Own Devices, Variance Will Again Diminish Over Time. This isn’t just me saying this – it’s a statistical law. Regression to the mean is a natural phenomenon. So, after artificially injecting variance into our communities through an elimination of formal recruitment, and then shifting the “mean” of a fraternity community positively by rewarding “good” chapters, fixing “mediocre” chapters and eliminating “bad” chapters, the chapters in a community will once again begin shifting towards the mean. The difference would be that the mean they are regressing towards would be a much different mean. In a period of 5-10 years, we could drastically change what the “average” fraternity in a given campus community looks like. And once “good” became the new normal, the intrinsic motivation and inherent competition in these new communities would propel many of these chapters to not only be good, but to strive for greatness. Then, we would have a mean that is not only high, but gradually drifting upwards, instead of the gradual downward drift that we see now on many campuses.

I call this a “Theory of Natural Selection” because, as you can see, only the strong will survive. Some chapters won’t make it without the crutch of IFC “formal rush” and the pool of always joiners from which to choose. Good riddance. Many bad chapters who choose to recruit the wrong way will need to be closed and then re-opened. Again, good riddance. But, to use a fishing example, when we restock our stream with recolonized groups, we will not be putting them back into the same dirty stream from whence they came, but into a new clean river with positive social norms and a healthy culture.

Formal recruitment is bad for business. It is an obstacle standing in the way of transforming our fraternity communities into what they can and should be. It forces fraternities to conform to unhealthy norms, resulting in the perpetuation of negative stereotypes and the gradual assimilation of every “good” chapter on our campuses to the mediocre or shitty campus norms. Formal recruitment facilitates the wrong people joining for the wrong reasons. If we want to change our cultures, we need to give our chapters every opportunity to recruit the right people seeking to join for the right reasons, reducing the pressure to conform by injecting more time into the process. Getting rid of formal recruitment is an important first step we need to take in making that happen.
Posted by Gentry McCreary at 7:37 AM 8 comments: