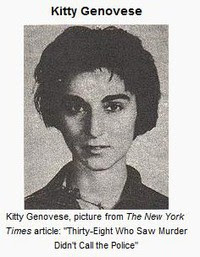 I had a chance to work with a campus recently who was interested in doing some bystander training. I happily obliged them, but after giving them my caveat of “my research has led me to believe that bystander training on its own is not a very effective prevention tool.” But, for whatever reason, many campus administrators and “prevention specialists” have convinced themselves that bystander training is the end all, be all of prevention programs, especially in the sexual assault realm. Someone told some Congressman at a hearing that bystander training showed promise as a primary prevention strategy, it made it into some legislation and a White House report, and now most campuses feel the need to dutifully check the “bystander training” box on their compliance checklist every year. WELL I’M NOT BUYING IT!!!

As my good friend Aaron Boe (who does some amazing prevention work) likes to say, bystander intervention is not a new concept. Cavemen likely understood the concept of helping out their fellow cavemen if they found themselves in a dangerous predicament. Famed biologist E.O. Wilson discussed this concept in his book “The Social Conquest of Earth,” theorizing that natural selection has taken place along two parallel tracks – individual-level selection, and group-level selection.  Groups that were more altruistic, consisting of individuals who were willing to sacrifice their own desires for the needs of the group, tended to win out over more selfish groups, and those altruistic traits have been genetically passed down over the millennia. We’ve literally evolved to be helpful, proactive bystanders. Helping one another is in our DNA, and you certainly don’t need to pay me (or anyone else) to come talk to your students about how they can be more helpful in dangerous situations.

If you read the literature on bystander behavior (which, having written a dissertation on the topic, I can assure you I have done), you will find that there are a number of things an individual must do in order to intervene in a dangerous situation (i.e. not be a bystander). The first, and arguably most important, thing on that list is that the person must interpret the situation as an emergency worthy of intervention. People fail to correctly interpret situations as problematic for one of two reasons: ambiguity, or conformity. In ambiguous situations, it isn’t clear whether a situation is an emergency. A great example of this is the Kitty Genovese murder – one of the things that gets lost in the Kitty Genovese story is that many people who heard the attack incorrectly interpreted it as a lover’s quarrel, and not a situation that required any sort of intervention (in fact, they were often surprised to learn that a murder had taken place).

The second reason people fail to interpret events as emergencies worthy of intervention is conformity. Much has been written of conformity – most famously the Asch Study in which individuals discuss the lengths of lines and conform to the answers of those around them. A lesser known study applies directly to bystander behavior – the Latane and Darley “Smoke-Filled Room” study. In this study, individuals were placed in a waiting room in one of two conditions – alone, or with confederates (individuals who were “in on the joke,” so to speak). After a few minutes waiting, smoke began entering the room through a vent. Those in the “alone” condition immediately got up and said something to someone or left the room 75 percent of the time. But in the “with others” condition, the confederates would sit silently and pay no attention to the smoke. The research subject would notice the smoke, but then notice that everyone else seemed to be paying the smoke no mind. In such conditions, less than 10 percent of research subjects said or did anything related to the smoke. The reason they did not say or do anything is often mistakenly attributed to diffusion of responsibility (I assumed someone else would do something), but the inaction was actually due to conformity. They looked around to see how everyone else interpreted the situation. When they surmised that they were the only person interpreting the smoke as a problem, they conformed to the norms around them and decided that the smoke was not a problem after all. It isn’t that they assumed someone else would do something (diffusion of responsibility) – they assumed that nothing needed to be done because of the inactions of those around them. By conforming to the responses of those around them, they failed to correctly interpret a dangerous situation as an emergency worthy of their intervention.

So, at this point in the post, you might be asking yourself “That’s great, Gentry, but what does any of this have to do with bystander training?” It’s a fair question. I plan to answer it now.

So often, bystander training focuses on “helping skills” (please read that as “quote unquote helping skills”).  We spend hours talking about diffusion of responsibility, and telling students that if they see something they should say something, that they shouldn’t just be a bystander, and then we “teach” students how to help or intervene in a variety of dangerous situations (sexual assault, hazing, alcohol poisoning, etc.).

But here is what the bystander research tells us – that if students are not correctly interpreting situations as emergencies worthy of intervention, then all the bystander training in the world will not get them to intervene. If a situation is ambiguous, or if others are not interpreting it as an emergency, then the odds that a student will correctly interpret the situation as problematic and intervene are very, very low.

What all of this means is that bystander training needs to be context-specific. That is, until students have a critical understanding of the issue you are trying to address (sexual assault, hazing, bullying, etc.) and the harm that can be caused by those behaviors, then trying to get them to intervene when they see these situations is an exercise in futility. Before bystander training can be effective, we need to help students understand the harm that can be caused by the behaviors we are trying to curb.

My friend and colleague Aaron Boe is probably doing the most innovative work in this area as it relates to sexual assault prevention, and his ideas have informed my own in this area. In his programs for men, he starts by helping them understand the trauma that can come from having your body violated by someone else – even if it is someone you know and trust, and even if it doesn’t seem particularly “violent.” The idea behind his approach is that most of the sexual assaults on college campuses are not perpetrated by scary strangers, and they do not meet our classic definitions of violent, and as a result, many college men fail to understand the harm that can be caused in a non-stranger assault involving alcohol. His program begins by helping them understand that harm, and then moves on to ways they can improve the culture around them by creating healthier norms and not being bystanders. Critical understanding of the harm comes first, conversations about bystander behavior come second. This is a critical concept for those of you interested in doing bystander training. If your students don’t fully understand the harm that can be done by having someone do something to your body that you don’t want to happen, then getting them to intervene in any meaningful ways is a tall order.

Bystander training probably isn’t a total waste of time, and that is not the concept that I want people to take away from this post. What I want people to understand is that bystander training is only effective when it is done as part of a broader prevention program that begins with helping students understand the critical issues involved in any particular behavior. Every time I do bystander training, and I offer a scenario involving a dangerous situation and ask them how they could intervene, students are immediately able to come up with several ideas, many of which are really thoughtful and creative. Students don’t need to be trained on how to intervene. They know how to intervene. What they don’t always know is when or why they should intervene. If we spent more time helping them understand the critical issues that would give them a better understanding of when to intervene, and less time teaching them what they innately already know, then our prevention efforts would be drastically more impactful.
Posted by Gentry McCreary at 9:17 AM