What Can Mega-Sororities Learn From Mega-Churches? 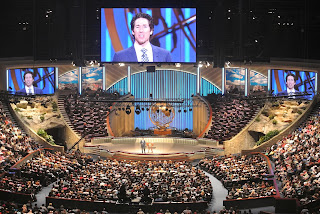 Doing some rudimentary math with the stats provided above would tell us that the average new member class size has jumped from just under 28 new members to just under 44 new members in the last 10 years, which means that chapter size has likely mirrored the growth in new members. Based on the data provided, the current average sorority chapter size nationally is 152 members (including new initiates).

Anecdotally, we know that on many campuses those numbers are much, much higher. My last year at the University of Alabama, quota during formal recruitment was over 90 and the average chapter size was in the neighborhood of 320. I’ve heard that on some campuses, chapters are now pushing 400 members. 400!!! That’s insane!!!

I am not one to pound my chest and implore students to consider what their founders would think, but I can’t help but wonder what our sorority founders would think of chapters with 400 members. When they created these organizations, is that what they had in mind?

What makes these super-sized sororities problematic is our recent finding (read more about it here) that the most altruistic forms of sisterhood – accountability and common purpose – begin declining once a sorority chapter hits 150 members. Much has been written of the “Rule of 150” – otherwise known as Dunbar’s Number. Malcom Gladwell wrote about it in his bestselling book “The Tipping Point.” The basic premise of the Rule of 150 is that once a group reaches 150 members, the social network begins to break down and the group begins to destabilize, because, as humans, we can only maintain a true sense of connection and accountability with around 150 people. To my knowledge, our research is the first to statistically show the rule of 150 actually playing out, which is kind of cool!

Mega-sororities are bad for sisterhood. Our research clearly demonstrates that. Women in chapters over 150 members are less likely to feel a deep sense of connection to the sisterhood, and those chapters struggle to create a true sense of accountability and common purpose among members. Women in these chapters are much more likely to see the sorority as a social outlet or a place to go for support among a small group of sisters, but are less likely than women in smaller chapters to ever “get” the higher levels of sisterhood.

This should concern all of us involved in the “fraternal movement,” because I don’t see the growth trend reversing or even slowing down any time soon. Mega-sororities are here to stay.

If we can’t get rid of Mega-sororities, then we have to come up with a way to make them better. In particular, we have to come with ways to help members of mega-sororities connect with one another in more meaningful ways that allow for higher degrees of personal accountability and create better understanding of the common purpose of the organization.

The first thing we have to acknowledge is that the traditional structure of sorority chapters is poorly suited to fostering sisterhood in mega-sororities. In a chapter of 200+ members, not everyone will have a chance to get truly involved and engaged in the work of the chapter. I can’t tell you how many young women I worked with at Alabama who fell victim to this phenomenon – they were involved student-leaders in high school, came to Alabama expecting to have that same experience, joined a 300-member sorority, and just became a face in the crowd. No meaningful leadership opportunities. No opportunities to shine. No opportunities to connect with others in meaningful ways. Many of them eventually drifted away from the sorority once the “fun” aspect wore off, and tried to find meaningful engagement in other areas of campus life.

The fact is, a traditional chapter structure just does not work in mega-sororities. With only 10 chapter officers, and perhaps another dozen or so committee chairs, there are limited opportunities for meaningful engagement for members of these groups. Chapter meetings, which should be an opportunity for meaningful engagement and dialogue, become a series of announcements about decisions that have already been made by the executive board.  Uninvolved members just become a face in the crowd, rarely connecting with anyone outside of a small group of members in their pledge class, and never feeling truly connected to the majority of chapter members.

I propose that, in looking for alternative structures for those chapters approaching mega-sorority status, we take a few pages from the playbook of another growing entity in our country – megachurches.

A recent study by Baylor University showed that a growing number of Americans now attend congregations with a weekly attendance of over 1,000 people. This research also suggests that people in large congregations attend less frequently, give less financially and experience diminished feelings of belonging relative to people in smaller congregations. In short – megachurches are growing, and they are experiencing many of the same challenges as mega-sororities.

So how have the successful megachurches managed this growth? What are they doing to keep their members plugged in and engaged? How do organizations with thousands of members maintain a sense of connection and belonging among their members?

The answer is pretty simple –instead of making the big Sunday morning service (i.e. chapter meeting) the focus of membership, the successful megachurches make sure that the primary focus is on the activities of small groups.

The research shows that there are multiple benefits to small group-based churches. As one of the Baylor researchers noted, “Any type of small group will benefit a church, whether it's a Sunday school, a service group or a basketball league, because of the belonging and commitment they foster.” Small groups foster a deeper sense of belonging, higher levels of commitment, higher levels of personal accountability and, perhaps most importantly, increased levels of trust among members. The result of all this? Higher levels of participation, increased levels of financial support for the church, and members who report more depth in their spiritual journey.

Nationally, a handful of sororities have toyed with some programming designed around small groups, but none of these initiatives seem to have gained much traction. There’s a reason for this – small groups can’t just be seen as another of many programmatic offerings for already over-programmed sorority members. As the Baylor study notes, "Small groups are the center of the church -- not just one of many programs.”  In the churches that do this right, small groups are at the center of everything.

Instead of adding small groups on as an optional program, small groups need to become the center of chapter life in mega-sororities.  Instead of weekly chapter meetings, bi-weekly small group meetings (one to discuss chapter business, and another focused around sisterhood). The entire chapter should meet monthly or on an as-needed basis.  The leadership structure of the chapter should center around these small groups. Each group should have a leader, a social/sisterhood chair, a treasurer (with their own budget), a standards board, a scholastics chair, a community service/philanthropy chair, along with the appropriate committees. Each small group should be empowered to plan its own events, meet on its own schedule, and spend its own resources.

The move to a small-group chapter model will not be without its challenges, and the model I have described above still leaves us with many questions that need to be answered. Questions like:

How big should the small groups be? The research here appears to be inconclusive, and this would vary depending on the structure (i.e. fixed, closed groups or open, interest-based groups). More research would need to be done to determine an “ideal” small group size.

What “overall” chapter offices would still be needed? Again, I’m not sure about the answer to this one. To be certain, a chapter president would still be a necessity. Chapters would probably still need a social chair, a treasurer, and the full bevy of recruitment officers. Beyond that, we would just need to experiment to see what is best handled among small groups, and what needs to have a chapter-wide focus.

How inclusive/exclusive would these small groups be? The research on this topic is murky. According to the Baylor study, “a risk for small groups is crossing the line from intimacy to cliquishness. By constantly adding new members, you can't go very deep, because it takes time to build relationships and trust. But a closed group, while it's good for intimacy, lends itself to being inward-focused.” The right balance would be necessary in order to promote sisterhood across these small groups, providing opportunities for interaction outside of the small group, while still placing a sense of intimacy within the small group setting. The Baylor study suggests this can occur by regularly forming new groups, or by limiting the time period for which groups meet. For example, groups might exist for one year and then be expected to split or reconfigure themselves in some other way every year.

As I read the research on small groups in megachurches, I was struck by the similarity between how members or churches describe their experience, and the language that students have used to describe brotherhood and sisterhood during our research in this area. Church members spoke of belonging, commitment, vulnerability, accountability and trust in the same ways that fraternity and sorority members discuss the brotherhood and sisterhood in their chapters. I think we can learn a great deal from megachurches, both in terms of how they keep people connected, and in how they inspire members to live out their values.


I am excited to know that a few national sorority headquarters are beginning to tackle the issue of mega-sororities, investigating new models and researching how the experience in those organizations can be improved. I think this work will go a long way in helping align our members’ experiences with the stated purpose and values of our organizations, even in chapters with 400 members. I challenge every sorority to begin investigating ways to make membership in these chapters something that can still be values-based and create real feelings of accountability, belonging and shared purpose, because mega-sororities are here to stay.
Posted by Unknown at 9:06 AM